Traits
Multiple Heads: Ladon has one hundred heads. While it has more than one head, he has advantage on saving throws against being Blinded, Charmed, Deafened, Frightened, Stunned, and knocked Unconscious. Ladon's heads do not grow back if cut off.

Wakeful: While Ladon sleeps, at least one of its heads is awake.

Actions
Hundred Headed Thrash: As a full round action, Ladon can make one melee attack against every creature within range.


Ladron is a huge serpent whose body branches forth into a hundred necks that end with one hundred sets of venomous fangs. Because of its many heads, Ladron never truly sleeps since a few heads always maintain a watchful sentry. Each of its one hundred heads can speak a different language. Hera appointed Ladon to be the guardian of the golden apples. While he is always watchful and dedicated to keeping thieves away from his charge, he is not very bright and easily duped.
Labels: Monster 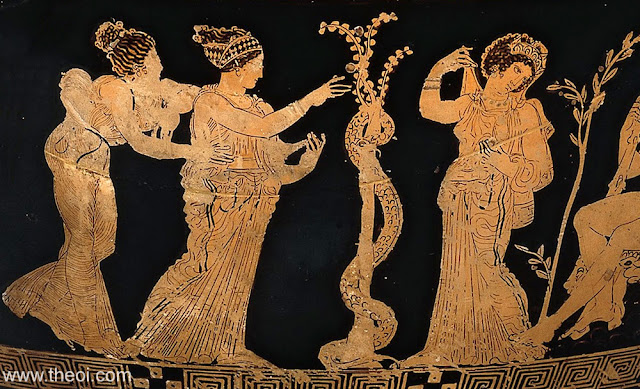 Actual Play VI: The Trial of Aphrodite (Part One)